I’ve been thinking and writing about the role of feminine characters in my paintings as I prepare a paper for the Alchemy Journal. Amelia is the most dominant of the women at present, having appeared in an earlier incarnation in Fama, the Aviator’s Dream and now Amelia beheads the King. To me she represents the embodied female alchemical archetype, the sacred feminine, the grail. 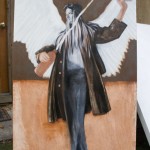 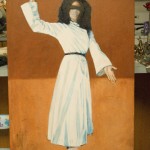 Painting here in Northern California is very different to working in Thousand Oaks. It’s cooler and damper, so it’s tough to get more than a couple of layers of gesso down in a day, which is nuts compared to the way I can work in Southern California, where a layer will dry almost completely within half an hour or so.

I worked on the Justice painting, with a poor effort to get her face done, resulting in ill-thought work that I quickly erased after a couple of hours, ready to begin again tomorrow. I’m more satisfied with my first definition of her hands, which are contrast to much at present, but will work well for further layers to fix errors and soften the quality of the skin. I want to look closely at Botticelli’s hands, which are simplified and graceful, and learn from them. I think I have a lot to learn from Rubens too, so perhaps I’ll visit some galleries here in San Francisco to seek out their works.

I’m very pleased with the progress I’ve made with Temperance, who is shaping up very nicely. I did a lot of work on her face and particularly her hair, which now cascades about her head, framing her face. The jacket has had still another layer, this time a glaze of black to bring out the deep shadows and darken the coat’s colour to rich dark leather.

Michael Pearce is an artist, writer, and professor of art. He is the author of "Art in the Age of Emergence."
View all posts by pearce →
This entry was posted in Alchemical work, Amelia Earhart, Making work. Bookmark the permalink.