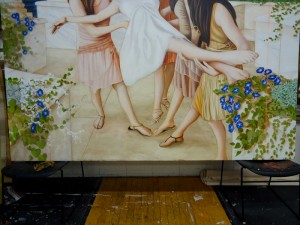 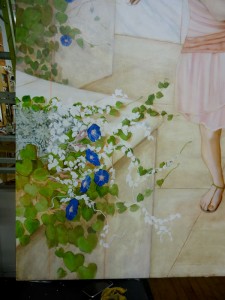 New creeper leaves drafted in Foundation White. It's already much more complex. I've painted only to the new edge of the left side of the work.

The orange line shows where the new edge of the painting is going to be.

I’m letting the Empire painting rest for a little while so I can look at the piece again with a fresh eye in a couple of weeks, so I’ve moved to the old Empress painting. I’ve had this piece leaning against the studio wall for several months, waiting for a chance to change it. I’ve never been satisfied with it for numerous reasons, which I think I know how to fix now that I’ve had a long time to look at it and really figure out what bothers me about it.

In no particular order:

First: because of the square composition and the symmetry of the courtyard the girls are standing in the painting lacks flow and doesn’t invite a visual journey around the world within it, so I spent a while figuring out how to re-shape the canvas so that there is less symmetry, snapping a chalk line down the right side, cutting eight inches or so, then reducing the size of the pillar on the left, which occupies too much space on the edge of the canvas. If you look closely you’ll see orange chalk-lines that show how I plan to re-stretch the canvas onto stretcher bars.

Second: I HATE the extended feet of the girl who’s lying down, and these are definitely going to need a re-paint, which I’ll get to next week.

Third: I want to repaint all of the girls. Although the face of the girl who’s lying down is pretty, its not sitting on the body properly and needs to be repainted; then the others need to be fixed up, and the clothes need to get lighter and looser. Everything is too decorative right now – it needs to be more painterly.

Fourth: the marble is way too bright and lacks depth, the landscape needs to be worked on so that there’s more space in it, soÂ I deepened the shadows on the floor, making the space feel dirtier and giving the girls somewhere to stand. I also darkened the shadows on the walls on the left of the painting so that there’s more light moving through the space. I’ll continue with this later.

Fifth: I couldn’t stand looking at the facile vines I decorated the sides of the painting with. These have got to become much richer and more convincing. The decorative idea was nice, but it’s not the direction I want the paintings to go in. I need these paintings to belong to the same world.