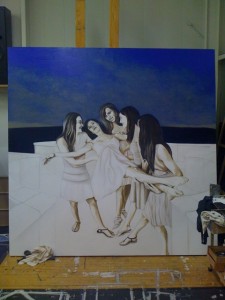 Having finished the en grisaille work I began working on the sky and ocean with a lovely Cobalt Blue from M Graham which seemed incredibly intense until it was ragged down to make the grey base coat emerge as the first gesture toward white fluffy cumulus clouds.

Making clouds becomes fairly straightforward when approached in these steps: grey base, ragged off blue, transparent white fluffy areas with opaque tops. The photo shows the second stage. Tomorrow I hope to lay down some whites to create the upper parts of the clouds. Everything in the sky will lighten up as the layers build up.

The ocean is based in a Cobalt Blue with some Ivory Black added to darken it, emulating the seas painted by Alma-Tadema. There wasn’t enough time to work on the surface of the water today.