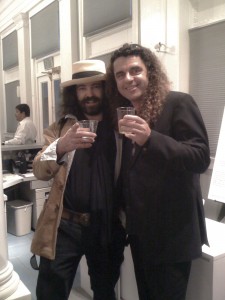 We visited the California Art Club exhibit at the Carnegie Art Museum in Oxnard, a small town on the California coastline north of Thousand Oaks. It’s a lovely neo-classical museum faced with white pillars. Inside, the pillar theme continues, giving the exhibits a formal classy quality that makes paintings that are more traditional in technique look right at home. When I ran into my Novorealism activist friend Alexey Steele at the exhibit, which includes one of his paintings, we got deep into discussion about the inevitable decline of post-modernism and the perceived conflict between its supporters and people who love classical technique, which really got me thinking about the ideology of painting in the 21st Century.

Actually battling against post-modernism isn’t where realist painters need to focus their attention – it’s going to die all by itself, having nowhere to go with its ideology. The pressure on studio artists now is going to be much more about technological advances with computers that produce simulacra of real paintings and sculpture.

Producing a coherent theoretical support for human endeavor as a superior outcome to computer generated art is, I believe, going to be a big issue in the near future.

Michael Pearce is an artist, writer, and professor of art. He is the author of "Art in the Age of Emergence."
View all posts by pearce →
This entry was posted in Novorealist, Other people's work, Soapbox. Bookmark the permalink.