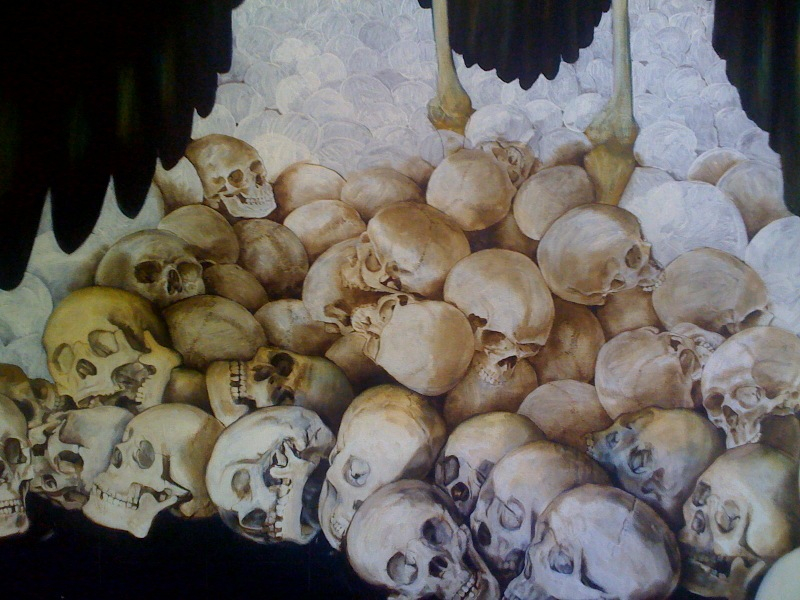 I’m back in the studio and in better shape, but still misfiring now and then. The bone painting machine is going in full force now, filling the lower half of the canvas with crania.

A pigment note – I picked up a tube of Graham Van Dyke Brown for use painting the skulls on the left, forgetting that I’d been using Maimeri Classico. Look at the difference between the two colours! And this is after I’d realized my mistake and mixed in some of the Maimeri to the Graham Â to make a gentler transition from one to the other. The Graham is far darker and less warm than the Maimeri, which I greatly prefer to the former. (I’m not complaining about Graham’s paint, by the way – their Van Dyke brown is perfectly fine well ground paint, I just like the warmer tones of the Maimeri as a base coat for these bones).

The shift in colour works out pretty well, as it happens, with these slightly darker skulls situated behind and to the right of the wing, where the shadow would be cast.

It’s good to be back in business, I hope I’ll be able to get a lot of work done in the next few days.

I’m really enjoying the way the skulls appear to be tumbling forward, as if the skeleton is striding through a wave of skulls, breaking about his legs as he carries them forward with him. It’s more dynamic like this with his legs half covered than when he stood upon the skulls, think I’ll keep it.