Definitely over the hump as far as that bad patch went. I had a fun morning getting some shadows laid down, with a strong frontal light implied by the long shadows falling behind the figure and stones. It really has laid down the objects to the ground and gives a nice depth to the painting. 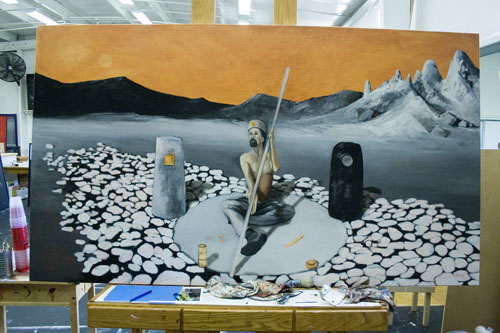 However, I also put down a layer of raw sienna to bring some gravelly colour into the grey surface of the ground, and will need to repaint those shadows again shortly. The raw sienna works nicely a a basis for more work on the rocks, which will get a white glaze again. I expect to rework the shadows between the stones again, particularly the sides that would be closest the the light source, so that the contrast of the shadow is intensified where it’s closest to the light. 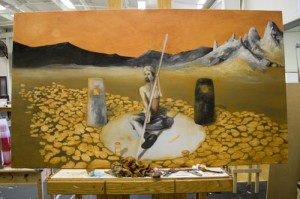 You’ll notice that the hermit has had a substantial shave! I thought about hermit archetypes and reconsidered what my image of a contemporary hermit would be. I decided to go for a more military appearance, reflecting the ascetic discipline of the hermit, not the “wild man” aspects of the type. 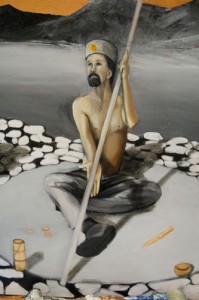 He reminds me a little of Edward Norton, the actor in American History X. I still have to get that face right.

The colour of the painting has gone a bit psychedelic again. This will settle down as the painting gets more layers added to it, but putting down these strata is really important as I build up the texture of the surfaces. When I scrape these rich layers with a knife later I’ll uncover some lovely rich colours that will make the finished surface vibrate.

I’ll have to get the shadows back in tomorrow, because I ragged quite a lot of them away when I was busy with the raw sienna layer, which was first painted, then mostly removed with a rag, giving me a crunchy texture to the paint.Â Having seen them and having the guides left after the rag work I did with the raw sienna is enough for today. The painting’s taking shape nicely.

Michael Pearce is an artist, writer, and professor of art. He is the author of "Art in the Age of Emergence."
View all posts by pearce →
This entry was posted in Alchemical work, Bombers, Making work and tagged Alchemical work, mysticism, oil. Bookmark the permalink.