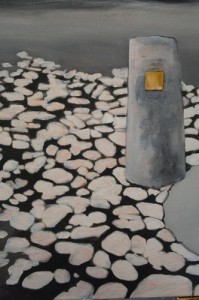 The dark spaces in between are most important in the early stages of a painting, the way I like to make them, anyway. I lay down the shapes of the dark shadows and work out from them, upward toward light. As such, this way of painting can be seen as the bastard child of alchemy, which is ultimately the spiritual process of burning away the dross and progressing towards the light through a series of transformations.

I’m in a pretty dark mood these days.Â

I painted more of the dark shadows between the slabs on the ground, which makes the circle feel like it’s floating, which I will fix later by adding the missing shadows of the stick, the figure of the hermit and the objects. The stones will also need shadows on the ground if they are to be convincing.

In landscapes the further back you get, the greyer and more soft-focussed things become, this applies to the shadows here. I’ll make the foreground shadows far crisper than the ones that are further back in the picture so that the illusion of depth is given. 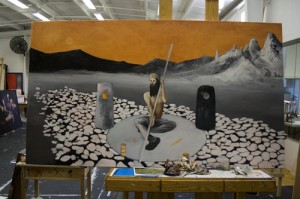 I’m not particularly thrilled with my drawing of the hermit figure. I think I’ll have to spend a day playing with the construction of the legs in particular.Â

I will also need to move the coins slightly so that they are on the correct line between the lantern (which I rediscovered in my garage today after a brief search) and the hole in the black monolith.

By the way, the black and white stones are associated with the Priestess, but not Boaz and Jachin.

Michael Pearce is an artist, writer, and professor of art. He is the author of "Art in the Age of Emergence."
View all posts by pearce →
This entry was posted in Alchemical work, Bombers, Making work and tagged masonry, mysticism, oils. Bookmark the permalink.