At the beginning of a thousand skulls 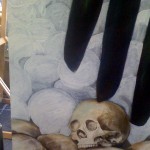 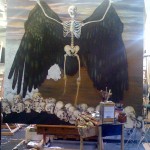 I’ve moved the angel back to the big easel, while at the other end of the studioÂ the Traveler waits to be removed from the wooden panel he’s stapled to right now. Returning to the angel feels pretty natural, even after spending so much time focused on the flowers and landscape of the other painting. I’ve been painting the first layer of the thousand skulls that will cover the valley floor. It’s deceptively slow work, because I have to be sure to gradually develop the size of each skull as they come closer to the picture plane. It’s going to be fun to get all these bones right.

The beams of light streaming through the windows on the right of the last photo made me think that it might be exciting to have light similar to that in the painting, but coming from the opposite side so that the direction matches the lighting of the skeleton.