Amelia reaches for the light

I’ve been so busy with organizing the Halloween festival that painting has been moving quite slowly, but I did get to put the primer layer over the drawing of Amelia as she reaches for the light in the big painting. It’s pretty hard to see the graphite under the burnt sienna layer, and I might start switching over to the old way of rendering the first drawing in ink, which obviously stands up better to the wear of painting that lovely rich oxide over it. 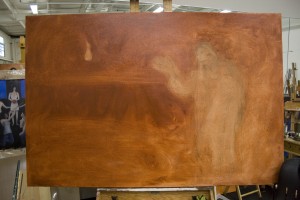 I’m increasingly interested in painting subjects that express the spiritual search for God. In this piece I’m using Amelia as a metaphor for all people who are on that journey. She’s in the air somewhere, reaching out for the light, closer to the divine essence than she has been – just maybe she can reach it. Incidentally, I’m using the word “God” in a loose way – I think whether we talk of God, or the Universe or, the Goddess, or any other term to express the ineffable mystery of the creation is a matter of semantics, that actually is quite immaterial to the search itself. Aren’t physicists and chemists engaged in the same search for understanding the nature of the universe? I don’t see any difference. Â

There’s thunder in the air. The wind just turned and it’s going to pour. I had planned to go camping with my children this weekend, but I guess we’re out of luck. Maybe I’ll put the tent up in the studio!Â

Michael Pearce is an artist, writer, and professor of art. He is the author of "Art in the Age of Emergence."
View all posts by pearce →
This entry was posted in Amelia Earhart, Making work. Bookmark the permalink.