A Deeper Darker Pool, Scattered Gold, and a Raised Hand 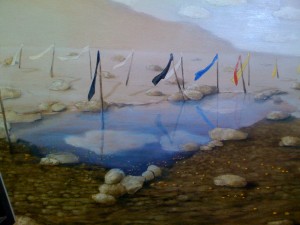 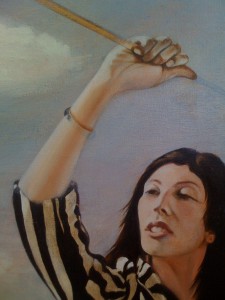 The Prussian Blue I mentioned yesterday has deepened and darkened the water in the pool closest to us, increasing the illusion of reflection in the water a little more. The colour of a reflected sky is deeper hued that the colour of the real sky.

I’ve added some of the same Prussian Blue to the black and the solitary Â blue rags tied to the sticks that form the cross, because they needed a little variety of hue to make them feel more solid. I’ve done the same with variation of hue on the other flags too. When we describe an object as “blue” (or any other colour), we actually simplify what’s actually happening with the colour of that surface, which in fact vibrates between a few different shades of blue, and may even include any number of other colours in its surface. Even a white wall has a soft gradation of colour as we look across ts surface, so when painting any area it’s important to remember to add some different colours to make it more convincing. I’ve dropped a little glaze of the Prussian Blue into the shadows of the rocks, deepening them and creating a little warm / cool vibration. It’s a problematic paint because it tends to stain whatever it touches, so you have to be much more careful with it than with other colours.

Those little stones scattered across the ground are glazed with Indian Yellow and Naples Yellow over the white I put down yesterday, actually making them a bit too colourful, so I’ll let this layer dry then re-glaze them with a little Raw Sienna and Van Dyke Brown to drop them down. The gold glitters a bit too brightly right now!

I’ve made significant progress on the raised hand, using Foundation White and Burnt Sienna over the roughed in layer I had already done. I’ve redrawn the fingers to correct some slightly inaccurate work, and made highlights and shadows more solid. I ran out of time, so the work isn’t quite complete, but there’s enough there to use as a basis for a final layer tomorrow, cleaning up and finishing. While I hope to get the other hand with the bowl done tomorrow I’m also really looking forward to designing a twist to the handle of the Magician’s wand.

Michael Pearce is an artist, writer, and professor of art. He is the author of "Art in the Age of Emergence."
View all posts by pearce →
This entry was posted in Magician, Making work. Bookmark the permalink.