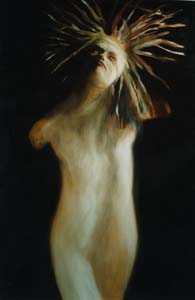 Boxing Jennifer is a painting I made for Jennifer LynchÂ (the director of Boxing Helena), who I’ve always been fond of. She has turned her life around recently, having just completed a new film called Surveillance which debuted at Cannes this year. Awesome! We showed our paintings together years ago in the Hollywood Zappa gallery and restaurant, Lumpy Gravy. I’d love to see her again, she was having a tough time then, but she was lovely. We traded paintings after the show closed – she got this one from me and I got an Eraserhead-like painting of a dark figure carrying a pink embryonic baby.

I’ve included the painting here because even though I made this before I got really deeply into the study of alchemy, it shows a woman going through an alchemical transformation. She’s the alchemical Queen, being put through the trials of purification until she’s ready for the spiritual union with the King, then becoming the quintessential purified being.

I did a little googling and found that she’s also been working on a movie called Hisss, which is about a Nagini-like snake woman. The snake in alchemy is a symbol of Hermes, whose caduceus rod shows the male and female principles as snakes intertwined around a rod to create the one thing. It’s also found as the ourobouros that endlessly devours its own tail.

Michael Pearce is an artist, writer, and professor of art. He is the author of "Art in the Age of Emergence."
View all posts by pearce →
This entry was posted in Alchemical work, Life, Other people's work and tagged lynch. Bookmark the permalink.