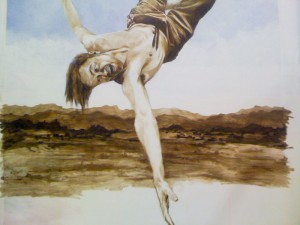 I’m having a great time painting the landscape behind the hanged man, which has populated itself with buildings and trees, and mountains that resemble the ones I see around me here at the edge of the Malibu range. I love the way these mountains stack up, fading layer by layer as they fall away into the distance. In the background behind the man’s elbow on the right hand side I’ve included a view of a strange looking hill that I drive past pretty regularly which always reminds me of a couple of places in England that I know pretty well: first Silbury Hill, which is a man made hill near Avebury that has been a feature of Wiltshire’s landscape for three thousand years; and second Glastonbury Tor, which I have climbed several times and love for its mysterious tower and legendary past as the church that Joseph of Arimathea founded a couple of thousand years ago when he brought the holy grail to England.

I’m using Raw Umber to sketch the landscape, pretty thin with ragged areas to lighten the paint and make gestures suggesting shadows in the dipping and rising waves of the hills and valleys. I painted the lowest part of the sky in a lead white to bring some brightness into the horizon. This will surely change later as I feel out the appearance of the sky, which I want to become quite dramatic.

Michael Pearce is an artist, writer, and professor of art. He is the author of "Art in the Age of Emergence."
View all posts by pearce →
This entry was posted in Hanged Man, Making work, Paintings, Tarot-related paintings. Bookmark the permalink.