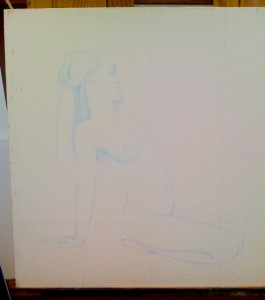 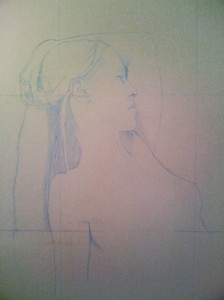 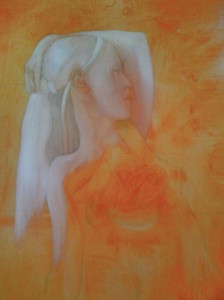 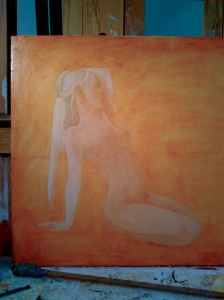 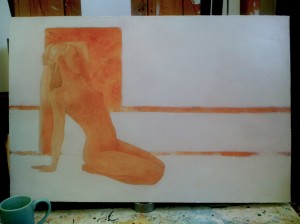 Iâ€™ve moved on with a new piece, with Suzy as my model (Iâ€™ll get to the Green Manâ€™s ears soon, I promise). I photographed her during a Figure Drawing class several months ago, thinking that this pose was too pretty to miss. The Pre-Raphaelites and other Victorian Aesthetes used to paint clothes onto nude figures with great success, so I thought Iâ€™d try it too. So far the drawing of the figure is complete (Iâ€™ll work out the geometry of her environment later), Iâ€™ve sealed the painting with Iron Oxide Red, and used a Foundation White to provide a local ground for the figure. I applied the white while the Oxide was still wet, allowing it to mix while being applied, resulting in a nice warm base for the addition of flesh tones.

I love painting beautiful women, and Iâ€™m enjoying this pose, which makes me think of a group of archetypal images of gorgeous women from the past. Doesnâ€™t it remind you of those Vargas beauties that pilots liked to paint onto the noses of fighting aircraft in World War Two?

Because Iâ€™m getting ready to shoot reference photos for a group painting of the Re-awakening Arthur Iâ€™ve been thinking recently about the mythical King quite a lot, so Iâ€™m not surprised to find imagery from his story creeping into my other paintings ahead of schedule; here Guinevere, La Reine de Coupe, is caught fixing her hair beside a bench in a bathroom in a marble neo-classical chamber, with a sword and cup beside her; the sword is Excalibur, the cup is the grail. A new story of the awakening King is about to begin.

Arthurian romances and early tarot cards have been connected closely since their origin in the fifteenth century. At roughly the same time that Bonifacio Bembo was found hunched over his work-bench in Milan applying gold leaf and delicate pigments to his designs of the first known Tarot cards, he also illustrated a manuscript edition of The Tales of Lancelot, clearly influencing his cards. Within a century tales of Arthur and the Knights of the Round Table were popular early outputs of a new-fangled invention that had emerged from Germany, the printing press, right on time for the printed Marseilles decks to make their appearance.

As a reference to Bembo Iâ€™m going to use one of his illustrations for a fresco painted on the wall beside the window behind the girl. Iâ€™m particularly interested in finding an image that invites men to become knights again, re-instilling ideas of chivalry and manliness.

Michael Pearce is an artist, writer, and professor of art. He is the author of "Art in the Age of Emergence."
View all posts by pearce →
This entry was posted in Arthurian, Making work, Queen of Cups, Sources, Tarot-related paintings. Bookmark the permalink.