The Symbolism of the Priestess 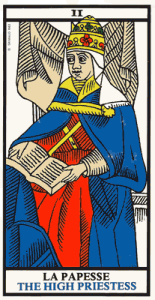 The virile energy of the fool and the manifested energy of the magician precede the energy of creation and order found in the image of the Priestess. In Caseâ€™s deck the Priestess sits solidly between the two pillars of the dyad, but the Marseilles deck conceals them beneath a veil behind her, with just a hint of carved stone on her left, suggesting that the triune mystery has not been revealed in fullness. In this card access through the pillars has not yet been opened, being guarded by an unusual watchwoman.

Some Tarot aficionados have attempted to explain the Priestess with a shocking anecdote that satisfies our human attraction to scandal, discovering that a distant cousin of the Sforza family, was executed for her heretical role as Pope Joan, the unfortunate female pope. Unfortunately, although the High Priestess is shown wearing the three layered papal tiara, in the fifteenth and sixteenth centuries this was not necessarily a reference to poor Joan and doesnâ€™t mean that this was the image of some sort of Gnostic female pope; instead the tiara was used to establish this kind of picture as an allegory for the handmaiden of Christ: the body of the church. She holds a book on her lap – the holy writings; to this day the Catholic Churchâ€™s role is as the protector of the dogmatic tradition of the word of God; a role that the heirs to St. Peter have fiercely protected. The Priestess is the church; her book is the holy writings.

(excerpted from my tarot journal)

Michael Pearce is an artist, writer, and professor of art. He is the author of "Art in the Age of Emergence."
View all posts by pearce →
This entry was posted in Priestess, Tarot-related paintings. Bookmark the permalink.