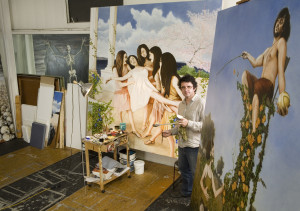 Working on “Empress” and “Imperium” in the studio. Photo by Donna Granata, Focus on the Masters

How do you start work on a painting?

Late medieval allegorical symbolism influences the ideas for my paintings a lot â€“ the paintings develop alongside my writing about it. Writing helps me to understand the paintings so much more clearly. Among other things I study late medieval alchemy and natural magic, both euphemisms for early science. The reverence and admiration expressed in the writings of early scientists for what they uncovered in their exploration of nature is extraordinarily emotional â€“ their accounts are full of awe for the miracles they discover. Imagine the humility and wonder of the alchemist who discovered phosphorus glowing in the alembic for the first time! I love that sense of wonder and appreciation for the world and I want to recapture it.
Consequently, much of my painting grows out of the rich ground of late medieval symbolic art. I often begin a painting after looking at allegorical imagery from the fifteenth century and thinking about how our need for the ideas expressed in the painting have changed. 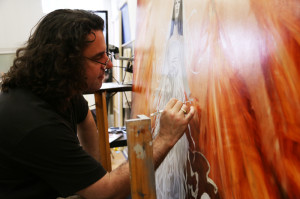 At work on “The Day”. Photo by Megan Stone

Itâ€™s interesting that complexity revisits the idea that man is a holistic, natural creature, living within a creative experiential continuum – this is directly in line with late medieval and early renaissance natural philosophy, which is the foundation for contemporary democratic Western culture and is very similar to emergence. Creating and understanding symbolism requires an appreciation of the phenomena of the universe as hierarchal emanations moving toward the center of the universal mind. This is a very ancient idea. Medieval diagrams simplified it as a great chain of being, or as a ladder. Jungâ€™s description of the self as the equivalent of an archetypal God is an allegorical relationship. His archetypes are allegorical images explaining behavior.

My paintings are almost all allegories about understanding how we can approach the universal mind in different ways. They often have alchemical themes, so youâ€™ll see expressions of the integration of male and female sides of the psyche finding balance, like the painting â€œImperiumâ€, which is an allegory of the cycle between the natural feminine mother and the material masculine father. 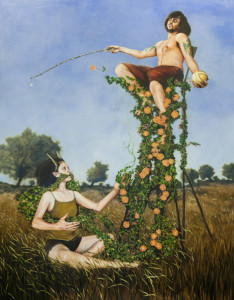 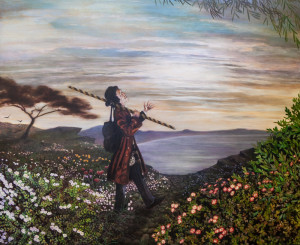 â€œThe Travelerâ€ is a personal favorite. It ties up many aspects of what Iâ€™d like to achieve in painting. Much symbolism here.
Iâ€™ve always loved a painting I gave to Bethlehem Lutheran Church in Granada Hills, California because I felt so emotionally involved in making the piece â€“ it was very personal. I was there at the church when they first put the painting on the wall; the choir were told that they should come out because the painting was up, and when they saw it for the first time a few of them began to cry. It was the most moving experience, knowing that they connected with the painting in the same way I had when I made it. We donâ€™t often get to see other people having an emergent experience of art. Iâ€™ll never forget it. I think this new painting â€œThe Dayâ€ might be like that. It has an unusual intensity about it.

How would you like your audience to react to your work?

To be drawn into the story; to try to figure out whoâ€™s doing what and why; to ask questions; to wonder about the painting; to allow the image to stay with them; to become emotionally wrapped up in the painting; to experience beauty and that thereâ€™s an alternative to darkness.

You clearly want to communicate something in the paintings, who are you speaking to?

I paint both for myself and for others. When I make a painting Iâ€™m trying to solve a problem: I want to successfully express an idea in the form of an image, but I also want other people to enjoy it and participate in it. Sometimes people explain my paintings to me and come up with ideas that I hadnâ€™t thought of. I like that because it might give me insight into other aspects of the idea that I hadnâ€™t thought of.

Thereâ€™s a dialogue in art. Itâ€™s a gift exchange: giving, receiving and returning. Ideally the artist looks upward to the mind, bringing an expression of their understanding of it into the work of art, offering it to you, the receiver of the art. The return is giving yourself to the experience of the art that lifts you toward the one. Ideally artâ€™s a gift that offers an opportunity for an experience of beauty. 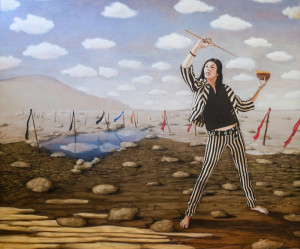 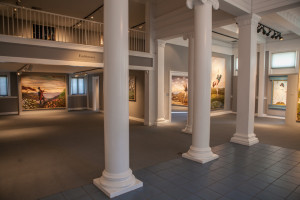 Installation view of “Emblemata” at the Carnegie Museum.

My most important priority is to get more studio time over the next two years. I want to complete seven more paintings to complete the body of work for the touring exhibit. The paintings are all based on tarot cards – I intend to completeÂ twenty-two. I’m planning to hire a couple of assistants next year to help in the studio so I can work faster. I know what the paintings are going to look like, so it’s really about studio process. From the reaction the paintings are already getting, I think it’s going to be a spectacular show.

I’m putting together an exhibit of the paintings to tour starting in Fall of 2016, visiting municipal and academic galleries. Iâ€™d like to see the work take on a life of its own, to share it with other people. You donâ€™t get a sense of the scale of the paintings in photos on a computer screen, even with a picture of an exhibit. Theyâ€™re very large, and make a powerful impression on people. I love the impact of displaying a large number of the paintings in one space, rather than the impact of a single painting.

I spend quite a lot of my time writing about art. Iâ€™ll continue doing that and publish a couple of books. These days I write in the mornings, paint in the afternoons, and spend the evening with my sweetheart. 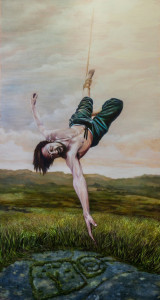 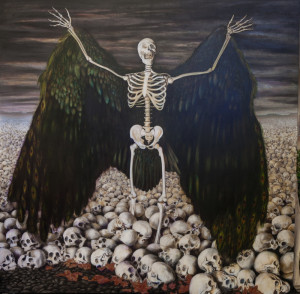